The Forgotten Rebels of Eureka by Clare Wright 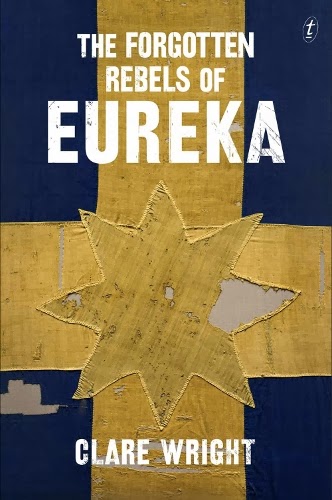 At this point, it is very difficult to write a book about Eureka that says something original. The familiar narrative can be done for either a serious audience or a popular one, but will generally only vary in the level of detail - not in the focus or the accepted facts.

The Forgotten Rebels of Eureka finds new ground by focusing specifically on the people who were excluded from the popular narrative. The story usually tends to focus on Lalor, Carboni, Rede, Hotham, and a few others - individual white males who tend to get a large share of the credit - along with the others who stood in the Stockade on December 3 who generally go nameless. Wright has cast her net much more widely than most, so that she includes the many people who agitated for change and fought for their democratic rights in the months leading up to that boiling point. This means that you get a much better sense of how much of a massive popular movement this was - not the work of a brave few who took up arms, but the result of a whole community banding together.

This means that included in the narrative are men whose contributions are rarely recognised, including those whose race doesn't fit the profile. But more so, the book focuses on women's contribution to the movement and general influence on goldfields life. This took many forms.

Some was what might be called the traditional method of female persuasion - indirect power through the patriarchal hierarchy - whereby Lady Hotham wielded political power because of the influence she held with her husband Charles Hotham; and whereby the women were expected to be a civilising force to the uncouth men of the diggings (not that they necessarily were).

Some was the material support they provided for the men. The analogy Wright draws is that of men chasing gold in the same way gambling addicts chase their next win, with the odds of success being in the same range. In a very real sense, the main breadwinners in most of the households were the women who stayed out of the mineshafts and ran businesses, and this kind of support is not to be underestimated - the Maori Musket Wars were as much about the introduction of potatoes as the introduction of muskets, and for exactly the same reason, none of the lauded men of the Stockade would have been able to do anything without the financial and gastronomical support of the goldfields women.

Some of this was simply the same sort of contributions men were making before the conflict came to a head - for example, petitioning the government and writing pro-democracy articles in the papers. Though there were fewer of them than the men, these women were no less important and no less talented, but their contributions tend to be largely glossed over in popular accounts.

In addition to bringing into focus the stories of the historically-marginalised, Wright looks at the words and actions of the key men from a feminist standpoint, as part of a larger attempt to get inside their heads and better understand their decisions. As I remarked in my review of Peter FitzSimons' book on Eureka, the motivations of the key players is often missing from popular accounts, beyond simplistic notions of Goodies and Baddies. FitzSimons gave some space to it, but what I love most about Forgotten Rebels is how much time is spent analysing the motivations of the key players, and how much more you understand the events with that context informing you. She considers not only the power dynamics between the sexes but also between classes and races - a very intersectional and comprehensive viewpoint.

I came into this having read FitzSimons' incredibly comprehensive book about a year ago, so I was a little skeptical that there was enough material left for Wright to turn into another 500-plus page book. Having finished it, I think there was, but I also think that it might be a bit much for the casual reader - it is incredibly detailed and a little repetitive, so only real Eureka-philes or people especially interested in feminist or revolutionary history should bother with it. If you fall into one of those categories, though - it is definitely worth the effort.
Posted by Simbera at 12:14 PM