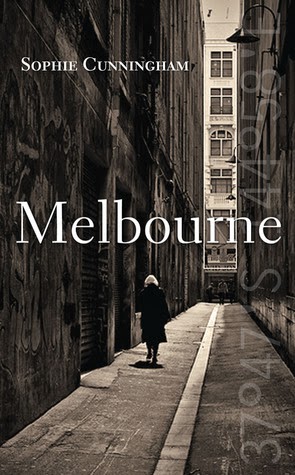 Part of the New South Cities Series, for which the University of NSW Press published books on some of the major cities of Australia, this book tells the story of Melbourne through the lens of Sophie Cunningham's experience of 2009. Despite this present-day memoir style, Cunningham tells the history of everything she encounters in this year, both in terms of the personal significance the places hold for her, as the place she grew up in, and in terms of the longer history, stretching back to the early days of white colonisation and the Indigenous history before that.

To me, this format is perfect for a book about Melbourne. What I've always loved about Melbourne is that it's the perfect blend between modern metropolis and ancient colony, between impersonal city and intimate community. You can walk the streets with your smartphone with 4G coverage and see all the best technology the world has to offer, nestled amongst some of the most gorgeous architectural feats of the 19th century. Everywhere you go there are touchstones that vibrate with the significance they hold, both to history and to the lives of individuals, and the format of the book echoes this - every part of Sophie's year is inextricable from her experiences growing up in the suburbs, and the history of the suburbs themselves.

The idea that Melbourne is somewhat like a small town is something Cunningham refers to early on, but something I'm not sure I agree with. In a small town, you know everyone - for better or worse, you have no choice but to know everyone. By simple proximity and a dearth of alternatives, the range of people you are forced to interact with is simultaneously broader and narrower; narrower because in almost every sense, they all come from the same place; broader because you don't get to pick the people who share your beliefs to the same extent you do in the city. I think rather than a small town, it would be better to say Melbourne has a strong sense of community. Coming from the country, this is another reason I always loved it from afar - in a city of four million people, even the most obscure fancies have a group of adherents, a community you can call your own. There is no doubt that there is a definite community among those who run in the same circles, and Cunningham demonstrates this by the way certain names keep cropping up throughout the book - as she has worked in a million roles in the publishing and arts community, she has been surrounded by familiar faces, and there is a real feel of family when she speaks of them.

Cunningham refers to the way TV shows and songs would make reference to people and places she knew in Melbourne, and what an utter thrill this gave her - Homicide being filmed in Melbourne's streets, Paul Kelly's lyrics about the sign on the silo, AC/DC on the back of a truck heading down Swanston Street. I had always thought this was something that would have little effect on Melburnians and other city-dwellers - we country folk love it because we are so starved of media representations of ourselves and our homes, but they see it all the time - but I loved the fact that Cunningham gets the same kick out of it that I do.

Ultimately this is a book of connections - between a city and its past, between people who share passions in a city that fosters them, between the decisions we make and how they will affect the future. It is wide-ranging for its short page count, dealing with everything from Indigenous life to gentrification of slums, from the Black Saturday bushfires and accompanying heatwave to the waterways (both visible and invisible) which shape the city, from railways to immigration to football to live music. It is little anecdotes about the people and places Cunningham loves, the workplaces and institutions and fine details that are necessary for a memoir to resonate on a human level. It is that pleasant little thrill of recognition, of familiarity, of - in an odd sort of way - home.

It is a love letter to a city I have been nursing a crush on for many years. To someone who doesn't have the same infatuation with the city I do, I can see how it might sag in bits - but to me it was perfect.
Posted by Simbera at 7:19 PM